The Balinese is a breed of oriental cat with long hair and Siamese-style markings, or points. It resembles a Siamese with a medium-length silky coat and a plumed tail, but is not nearly as fluffy as a Himalayan, and requires much less grooming. Balinese are extremely intelligent cats, although less talkative than their Siamese ancestors.

The Balinese was originally registered as a "longhaired Siamese", and examples were known from the early 1920s. The occasional long-haired kittens in a Siamese litter were seen as an oddity, and sold as household pets rather than as show cats. This changed in the mid-1950s, when two breeders, Mrs. Marion Dorsey of Rai-Mar Cattery in California and Mrs. Helen Smith of MerryMews Cattery in New York, decided that they would commence a breeding program for the longhaired cats. Helen Smith named the cats "Balinese" because she felt they showed the grace and beauty of Balinese dancers, and because "longhaired Siamese" seemed a rather clunky name for such graceful felines. The breed became quite popular after this, and a number of breeders began working on "perfecting" the Balinese appearance. This led eventually to the development of two entirely separate "strands" of Balinese cat - some owners prefer a traditional or "apple-headed" Balinese, while breeders and judges tend to prefer a more contemporary appearance.

Like the Siamese, there are now two different varieties of Balinese being bred and shown - "traditional" Balinese and "contemporary" Balinese. The traditional Balinese cat has a coat approximately two inches long over its entire body and it is a sturdy and robust cat with a semi-rounded muzzle and ears. The traditional Balinese closely resembles a Ragdoll cat although they do not share any of the same genes or breeding other than having a partially Siamese ancestry. A "contemporary" Balinese has a much shorter coat and is virtually identical to a standard show Siamese except for its tail, which is a graceful silky plume.

In most associations, the Balinese is accepted in a full range of colors, including the four traditional Siamese point colors of seal, blue, chocolate, and lilac, as well as less traditional colors such as red and cream, and patterns such as lynx (tabby) point and tortie point. However, in the Cat Fanciers' Association, the Balinese is only accepted in the four traditional Siamese colors; all other colors and patterns are considered Javanese. 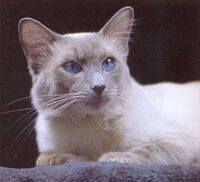 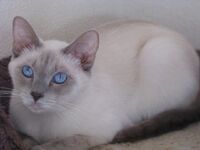 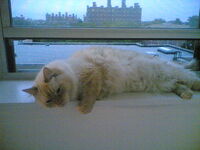 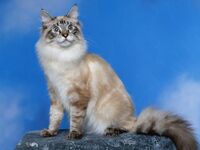 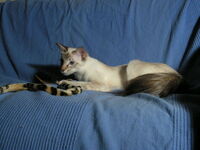 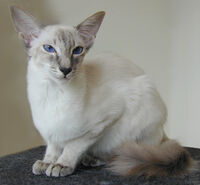