The Burmese (Thai: ศุภลักษณ์ subh-bha-lak meaning fortunate, beautiful, and splendid appearance) is a breed of domesticated cats split into two subgroups: the American Burmese and the British Burmese (and are not to be confused with "Sacred Cat of Burma," in respect of which, see Birman). Most cat registries do not recognise a split between the two groups, but those that do formally refer to the type developed by British cat breeders as the European Burmese.

The head, carried on a medium neck, should be in proportion to the body. Viewed from the front, it should form a short wedge, wide at the cheek bones and tapering to a blunt finish at the muzzle. The top of the head should be slightly rounded between the ears, which are set well apart so that the outer line of the ears continue the shape of the upper part of the face. However, in mature males who have developed full jowls and a sturdy neck, this will not be so apparent. Allowance should be made for a teething pinch in kittens.

In profile the head should show good depth between the top of the skull and the lower jaw. The brow should be slightly rounded. There should be a distinct nose break followed by a straight nose ending with the tip of the nose in the same vertical plane as the chin. The lower jaw should show a good depth of chin.

Medium in size, broad at the base, rounded at the tip and having in profile a slight forward tilt.

Allowance should be made for correctly shaped but overlarge ears in a kitten where the head size and shape is still developing. Eyes Must be set well apart. They should be large and lustrous, the top line of the eye showing a slant towards the nose, the lower line being rounded.

Any shade of yellow from chartreuse to amber, with golden yellow preferred.

Allowance should be made for eye colour in a kitten where it may still be developing and for colour dilution in an older cat.

Of medium length and size, feeling hard and muscular and heavier that its appearance indicates. The chest should be strong and rounded in profile, the back straight from shoulder to rump.

Legs should be slender and in proportion to the body, hind legs slightly longer than the front, paws neat and oval in shape. Tail Straight, medium thickness at the base and tapering to a rounded tip. when the tail is brought gently round the side of the body the tip should reach the shoulder.

Short, fine, satin-like in texture, lying close to the body. The glossy coat is a distinctive feature of Burmese and is indicative of good health. Condition Cats should be well muscled with good weight for size, lively and alert.

In all colours the under parts will be lighter than the back but the shading should be gradual. Ears and face may be slightly darker in colour. A coat free from barring or spotting should be aimed for in all colours. The presence of a few white hairs may be overlooked in an otherwise excellent cat. In all colours the coat should shade gradually to the roots with no evidence of smoke effect of ticking. Reds and Creams may show some freckling or brown pigmentation on ears, nose leather, eye rims, lips, paw pads.

The individual colour descriptions are for mature adults. Allowance should be made in kittens and adolescents for a lighter coat colour than the adult standard specifies. Paw pads may be a lighter colour in kittens than adults.

As a result of these separate breeding programmes, British Burmese are different from American Burmese. The British build tends to be more Oriental, with a more triangular face, while the American Burmese is stockier and rounder in the body, head, eyes, and feet. It has markedly full cheeks and a short muzzle, sometimes called "pug-like". In the British type, both the American Burmese's "cobbiness" and the obvious Siamese influence long seen in the breed are today considered grave, even disqualifying faults.

Ever since varieties other than sable/brown have existed, there have been conflicts in the world of cat fancy as to which varieties are considered Burmese. In Britain, all the colours listed below are recognised by the Governing Council of the Cat Fancy, Britain's ruling cat association. In the USA, which colours are acceptable depends on which cat registry the cat is registered with. For example, the Cat Fancier's Association only recognises the first four colours below. All varieties should gradually shade from darker backs to lighter underparts. There should be no barring or spotting.

Burmese cats are very dog like, very vocal like the Siamese and love attention. Female Burmese are more active and adventurous and meow more frequently and male Burmese are more laid back, easygoing and a bit more tolerant. But regardless of gender, Burmese cats grow a very strong bond and are clingy to their owner, very loving, and much less independent than a typical domestic housecat or moggy. This breed is also friendly and social around house guests and strangers. 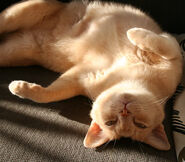 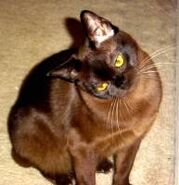