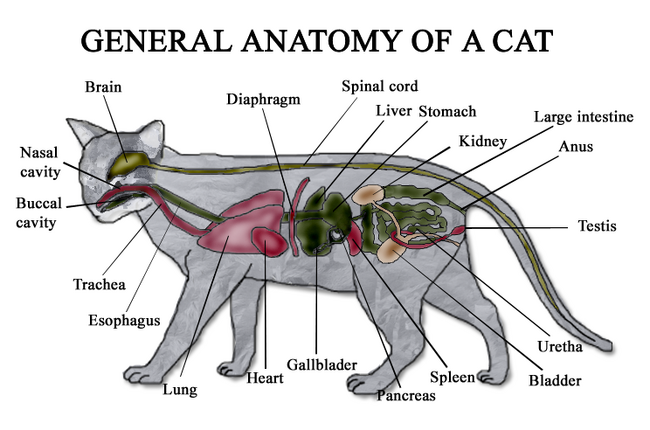 Cats have highly specialized teeth for the killing of prey and the tearing of meat. The premolar and first molar together compose the carnassial pair on each side of the mouth, which efficiently functions to shear meat like a pair of scissors. While this is present in canids, it is highly developed in felines. The cat's tongue has sharp spines, or papillae, useful for retaining and ripping flesh from a carcass. These papillae are small backward-facing hooks that contain keratin which also assist in their grooming.

As facilitated by their oral structures, cats use a variety of vocalizations for communication, including meowing, purring, hissing, growling, squeaking, chirping, clicking, and grunting. Their types of body language: position of ears and tail, relaxation of whole body, kneading of paws, all are indicators of mood.

Thirty-two individual muscles in each ear allow for a manner of directional hearing;[1] a cat can move each ear independently of the other. Because of this mobility, a cat can move its body in one direction and point its ears in another direction. Most cats have straight ears pointing upward. Unlike dogs, flap-eared breeds are extremely rare (Scottish Folds are one such exceptional mutation). When angry or frightened, a cat will lay back its ears to accompany the growling or hissing sounds it makes. Cats also turn their ears back when they are playing or to listen to a sound coming from behind them. The angle of cats' ears is an important clue to their mood.[citation needed]

Cats, like dogs, are digitigrades. They walk directly on their toes, with the bones of their feet making up the lower part of the visible leg. Cats are capable of walking very precisely because like all felines, they directly register; that is, they place each hind paw (almost) directly in the print of the corresponding forepaw, minimizing noise and visible tracks. This also provides sure footing for their hind paws when they navigate rough terrain. The two back legs make the cat able to leap far distances and fall from high places without getting hurt.

Like nearly all members of the family Felidae, cats have retractable claws. In their normal, relaxed position, the claws are sheathed with the skin and fur around the toe pads. This keeps the claws sharp by preventing wear from contact with the ground and allows the silent stalking of prey. The claws on the forefeet are typically sharper than those on the hind feet.[2] Cats can voluntarily extend their claws on one or more paws. They may extend their claws in hunting or self-defense, climbing, "kneading", or for extra traction on soft surfaces (bedspreads, thick rugs, skin, etc.). It is also possible to make a cooperative cat extend its claws by carefully pressing both the top and bottom of the paw. The curved claws can become entangled in carpet or thick fabric, which can cause injury if the cat is unable to free itself.

Most cats have five claws on their front paws, and four or five on their rear paws. Because of an ancient mutation, however, domestic and feral cats are prone to polydactylism, (particularly in the east coast of Canada and northeast coast of the United States) and can have six or seven toes. The fifth front claw (the dewclaw) is proximal to the other claws. There is a protrusion which appears to be a sixth "finger". This special feature of the front paws, on the inside of the wrists, is the carpal pad, also found on the paws of big cats and dogs. It has no function in normal walking, but is thought to be an anti-skidding device used while jumping.

Cats possess rather loose skin; this allows them to turn and confront a predator or another cat in a fight, even when it has a grip on them. This is also an advantage for veterinary purposes, as it simplifies injections.[5] In fact, the lives of cats with kidney failure can sometimes be extended for years by the regular injection of large volumes of fluid subcutaneously, which serves as an alternative to dialysis.[6][7]

The particularly loose skin at the back of the neck is known as the scruff, and is the area by which a mother cat grips her kittens to carry them. As a result, cats tend to become quiet and passive when gripped there. This behavior also extends into adulthood, when a male will grab the female by the scruff to immobilize her while he mounts, and to prevent her from running away as the mating process takes place.[8]

This technique can be useful when attempting to treat or move an uncooperative cat. However, since an adult cat is heavier than a kitten, a pet cat should never be carried by the scruff, but should instead have its weight supported at the rump and hind legs, and at the chest and front paws.Template:Or Often (much like a small child), a cat will lie with its head and front paws over a person's shoulder, and its back legs and rump supported under the person's arm.

This muscle's origin is the lumbodorsal fascia and ribs.

This muscle's origin is the lumbodorsal fascia and pelvis.

This muscle is the innermost abdominal muscle.

To see this muscle, first remove the extensive aponeurosis situated on the ventral surface of the cat. Its fibers are extremely longitudinal, on each side of the linea alba. It is also traversed by the inscriptiones tendinae, or what others called myosepta.

The deltoid muscles lie just lateral to the trapezius muscles, originating from several fibers spanning the clavicle and scapula, converging to insert at the humerus. Anatomically, there are only two deltoids in the cat, the acromiodeltoid and the spinodeltoid. However, to conform to human anatomy standards, the clavobrachialis is now also considered a deltoid and is commonly referred to as the clavodeltoid.

The acromiodeltoid is the shortest of the deltoid muscles. It lies lateral to (to the side of) the clavodeltoid, and in a more husky cat it can only be seen by lifting or reflecting the clavodeltoid. It originates at the acromion process and inserts at the deltoid ridge. When contracted, it raises and rotates the humerus outward.

A stout and short muscle lying posterior to the acromiodeltoid. It lies along the lower border of the scapula, and it passes through the upper arm, across the upper end of muscles of the upper arm. It originates at the spine of the scapula and inserts at the deltoid ridge. Its action is to raise and rotate the humerus outward.

The Masseter is a great, powerful, and very thick muscle covered by a tough, shining fascia lying ventral to the zygomatic arch, which is its origin. It inserts into the posterior half of the lateral surface of the mandible. Its action is the elevation of the mandible (closing of the jaw).

The temporalis is a great mass of mandibular muscle, and is also covered by a tough and shiny fascia. It lies dorsal to the zygomatic arch and fills the temporal fossa of the skull. It arises from the side of the skull and inserts into the coronoid process of the mandible. It too, elevates the jaw.

The Rhomboideus is a thick, large muscle below the Trapezius muscles. It extends from the vertebral border of the scapula to the mid-dorsal line.

The Rhomboideus capitis is the most cranial of the deeper muscles. It is underneath the Clavotrapezius.

The Splenius is the most superficial of all the deep muscles. It is a thin, broad sheet of muscle underneath the Clavotrapezius and deflecting it. It is crossed also by the Rhomboideus capitis. Its origin is the mid-dorsal line of the neck and fascia. The insertion is the superior nuchal line and atlas. It raises or turns the head.

The Serratus Ventralis is exposed by cutting the wing-like Latissimus Dorsi. The said muscle is covered entirely by adipose tissue. The origin is from the first nine or ten ribs and from part of the cervical vertebrae. The insertion is the vertebral border of the scapula. It draws scapula forward, backward, and against the body.

The Serratus Dorsalis is medial to both the scapula and the Serratus Ventralis.

The Intercostals are a set of muscles sandwiched among the ribs. They interconnect ribs, and are therefore the primary respiratory skeletal muscles. They are divided into the external and the internal subscapularis. The origin and insertion are in the ribs. The intercostals pull the ribs backwards or forwards.

Pectoantebrachialis muscle is just one-half inch wide, and is the most superficial in the pectoral muscles.

The most posterior, flat, thin, and long strip of pectoral muscle is the Xiphihumeralis. It is a band of parallel fibers that is found felines but not in humans. Its origin is the Xiphoid Process of the sternum. The insertion is the humerus.

In the cat there are three thin flat muscles that cover the back, and to a lesser extent, the neck. They pull the scapula toward the mid-dorsal line, anteriorly, and posteriorly.

The most anterior of the trapezius muscles, it is also the largest. Its fibers run obliquely to the ventral surface.

Acromiotrapezius is the middle trapezius muscle. It covers the dorsal and lateral surfaces of the scapula.

Spinotrapezius, also called thoracic trapezius, is the most posterior of the three. It is triangular shaped. Posterior to the acromiotrapezius and overlaps latissimus dorsi on the front.

In the female cat, the genitalia include:

Together with the vulva, the vagina of cat is involved in mating and provides a channel for newborns during parturition, or birth. The vagina is long and wide.[11] Genital passages are the oviducts of the cat. They are short, narrow, and not very sinuous.[11]