The Himalayan cat is a breed of long-haired cat identical in type to the Persian, with the exception of its blue eyes and its point coloration, which were derived from the crossing of the Persian with the Siamese. In Europe they are referred to as Colourpoint Persians.

While the Himalayan is considered a breed separate from the Persian by The International Cat Association, it is grouped together with the Persian and Exotic Shorthair (shorthaired version of the Persian) under a "Persian Breed Group standard".[1]

The Cat Fanciers' Association considers the Himalayan a color variation of the Persian rather than as a separate breed, although they do compete in their own color division.

Like Persian cats, the Himalayan cat tends to have a round (cobby) body with medium length legs. Some do have more of a Siamese like body, though, and can jump as high as seven feet.

A Himilayans have the facial characteristics similar to the Persian, which is a flatter, wider face with "squashed" features.

These cats are sweet-tempered, intelligent and generally very social and good companions. Because of their heritage from the Siamese cats they tend to be more active than Persians.

Himmies, as fanciers call them, are perfect indoor cat companions. They are gentle, calm, and sweet-tempered, but they possess a playful side as well. Like the Siamese, Himalayans love to play fetch, and a scrap of crumpled paper or a kitty toy will entertain them for hours. Himalayans are devoted and dependent upon their humans for companionship and protection. They crave affection and love to be petted and groomed. [2]

Due to their Persian ancestry, some Himalayans may have the gene that causes Polycystic kidney disease, (PKD), but a genetic test can reveal which cats carry the PKD gene, so that they may be spayed or neutered.

Like many long-haired cats, Himalayans need to be brushed daily to keep their coats looking their best and healthiest. In addition, they may need their face wiped daily, depending on the cat. Bathing a Himalayan is also recommended by some breeders, to help reduce the amount of oil on the cat's fur and skin.

The fur on the body of a Himalayan is white or cream, but the points come in many different colors: seal (or black), blue, lilac, chocolate, red (flame), and cream. The points can also be tabby or tortoiseshell-patterned. The chocolate and lilac point Himalayans are the most difficult to produce, because both parents must carry the gene for chocolate/lilac to produce a chocolate or lilac kitten, as the trait is autosomal recessive.

Some registries, such as TICA, may allow cinnamon/fawn versions of these 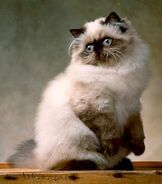