The Munchkin is a relatively new breed created by a mutation that causes achondroplasia, or more likely hypochondroplasia as the skull size is unaffected, resulting in cats with abnormally short legs. However, the shortness of their legs do not seem to interfere with their running and leaping. The breed originated in 1983 when Sandra Hochenedel found an extremely short-legged black cat living under a trailer in Louisiana. This cat, named Blackberry, was pregnant and half of her kittens were born short-legged. One of Blackberry's kittens, a tomcat named Toulouse, became the father of a breeding program that established the breed in North America.

While a few cat registries have recognized the breed, others have not, including the FiFe, which refuses to recognize what they consider a breed based on a "genetic disease", achondroplasia. The Governing Council of the Cat Fancy likewise refuses to recognize the breed, considering this breed and others like it to be "unacceptable" because they are based on an "abnormal structure or development". The breed is also not recognized by the Cat Fanciers' Association. Among the cat fancies that recognize the breed are The International Cat Association, the Southern Africa Cat Council, and the Waratah National Cat Alliance in Australia

There is controversy among breeders of pedigree cats as to what genetic mutations are abnormal and potentially disadvantageous to the cat. While several dog breeds such as Dachshunds have short legs, some critics note the higher dependence cats put on their legs for climbing ability and overall agility. Some governments consider the munchkin breed to be "malformed animals" and the deliberate breeding of them "unacceptable" because of the "genetic health problems associated with such breeding". But keepers and breeders of munchkins declare them to be "a sound breed" that is "ideal" for small homes and not particularly susceptible to health problems.

Throughout history and around the globe there have been sightings of short-legged cats from Russia to Germany to Great Britain.[1] A breeding population existed in Europe around the middle of twentieth century but the lines died out during and after the Second World War.[2]

The breed was first discovered in the United States in 1964 by Ellen Kasten in the town of Westbury, New York. Growing up on a farm, Mrs. Kasten was particularly inclined to welcome any animal into her home. She named the first Munchkin "Little One" due to her tiny legs as a kitten. However, the cat was not bred and therefore was not discovered again until 1983 when Sandra Hochenedel, a music teacher in Louisiana, found 2 pregnant cats who had been chased by a bulldog under a truck. She kept one of the cats and named her Blackberry and half of her kittens were born short-legged. Hochenedel gave a short legged male kitten from one of Blackberry's litters to a friend, Kay LaFrance, and she named the kitten Toulouse. It is from Blackberry and Toulouse that today's Munchkin breed is descended.

The Munchkin was first introduced to the general public in 1991 via a national network televised cat show held by The International Cat Association (TICA) in Madison Square Garden. Critics predicted that the breed would develop back, hip and leg problems similar to those that plague some Dachshunds.Studies were conducted by Dr Solveig Pflueger (Chief of the genetics committee for TICA) who determined that the Munchkins were physically sound.

Amidst much controversy, TICA accepted the Munchkin into its New Breed development program in September 1994. One veteran show judge—who had Munchkin supporters threatening to burn her house—resigned in protest, calling the breed an affront to breeders with ethics. The Munchkin achieved TICA Championship status in May 2003. 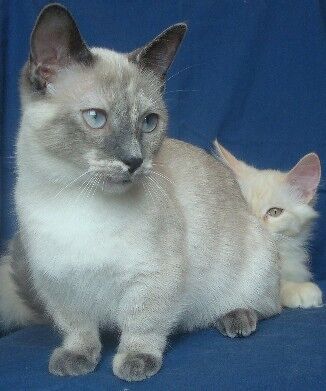 The Munchkin is generally described as a sweet-natured, playful, people-oriented, outgoing and intelligent cat which responds well to being handled.

The Munchkin is a small to medium sized cat with a moderate "semi-foreign" body type. A male Munchkin typically weighs between 6 to 9 pounds (3–4 kg) and is usually larger than a female Munchkin, which typically weighs between 4 to 8 pounds. The short legs of the Munchkin may be slightly bowed, although excessive bowing is a disqualification in the show ring. Cow-hocked legs are also penalized. The hind legs can be slightly longer than the front. According to the Animal Planet show Cats 101, there are three types of legs on Munchkins: standard, super-short, and rug hugger.

As pets they are very playful and outgoing; they don't let their shorter legs hinder them from doing things that other cats do. Munchkins are also a very smart cat breed.

The body of the Munchkin cat is medium sized with a level spine with a slight rise from the shoulder to the rump.

For TICA shows, they are separated by fur length into two groups: Munchkin and Munchkin Longhair. The short-haired variety has a medium-plush coat while the Long-haired has a semi-long silky coat. The Munchkin comes in all colors and patterns.[1] This variety stems from the outcross program, which allows the use of any domestic cat that does not already belong to a recognized breed. Similarity to other breeds is grounds for disqualification.[3]

For the most part Munchkins are a healthy and hardy cat that in general suffer from the same common health problems as other cats but lordosis and pectus excavatum have been documented conditions seen in a few Munchkin cats. These are rare medical conditions seen in other cat breeds too and are not specific to the Munchkin breed.

Dr. Solveig Pflueger, chairperson of TICA's genetics committee and advisor to the Board of Directors conducted studies on the Munchkin cats to determine the over all genetic health of the breed. Based on the research she discovered them to be "happy healthy cats" and that they should have a future as a Championship breed.[4] In 1995 several Breeders had their oldest Munchkins X-rayed and examined for signs of joint or bone problems and no problems were found.[4]

The Munchkin cat is the result of a genetic mutation and some people believe that they should not be continued to be bred but others see little difference in a short legged cat breed and the short legged dog breeds such as the Dachshund, Bassett hound and Corgi.

There is controversy among breeders of pedigree cats as to what genetic mutations are abnormal and potentially disadvantageous to the cat. The Australian Capital Territory (a territory of Australia) government consider the munchkin breed to be "malformed animals" and the deliberate breeding of them "unacceptable" because of the "genetic health problems associated with such breeding".[5] Owners and Breeders of munchkins declare them to be "a sound breed" that is "ideal" for small homes and not particularly susceptible to health problems.[6]

Small litter sizes when two munchkin cats are crossed indicate that embryos which are homozygous for the munchkin gene are non-viable.[7]

Several cat registries do not recognize the Munchkin: Fédération Internationale Féline, which refuses to recognize what they consider a breed based on a "genetic disease", achondroplasia.[8] The Governing Council of the Cat Fancy likewise refuses to recognize the breed, considering this breed and others like it to be "unacceptable" because they are based on an "abnormal structure or development".[9] The breed is also not recognized by the Cat Fanciers' Association.[10]

The munchkin gene is an autosomal dominant one.[8] Homozygous embryos for the munchkin gene are not viable due to gene lethality. Only kittens that are heterozygous for the munchkin gene develop into viable short legged munchkin kittens.[7] Because only heterozygous munchkin cats are able to pass on the gene, all litters with at least one munchkin parent have the possibility of containing kittens with the phenotypes: short-legged or normal-legged referred to as non-standard munchkin), with the genotypes of Mm or mm, where M is the trait for short legs and m is the trait for long legs. A litter with two munchkin parents, Mm x Mm, can produce have the chance of producing these offspring: 25% MM- a nonviable kitten, 50% Mm-short-legged, 25% mm- normal.

Punnett squares, in which the M represents the dominant munchkin gene and the m represents the recessive normal gene, may be used to illustrate the chances of a particular mating resulting in a short-legged cat.