The Persian is a longhaired breed of cat characterized by its round face and shortened muzzle. One of the oldest cat breeds,[citation needed] it takes its name from its place of origin: Persia (Iran). Recognized by the cat fancy since the late 19th century, it was developed first by the English, and then mainly by American breeders after the Second World War. In Britain, it is called the Longhair or Persian Longhair.

The selective breeding carried out by breeders has allowed the development of a wide variety of coat colors, but has also led to the creation of increasingly flat-faced Persians. Favored by fanciers; this head structure can bring with it a number of health problems. As is the case with the Siamese breed, there have been efforts by some breeders to preserve the older type of cat with a more pronounced muzzle, which is more popular with the general public. The hereditary polycystic kidney disease is prevalent in the breed, affecting almost half the population in some countries.

The placid and homely nature of the Persian confers a propensity for apartment living. It has been the most popular breed in the United States for many years but its popularity has seen a decline in Britain and France.Personality Persians are very loving and affectionate. Although these long-haired beauties are attention-loving, they are extremely loving and seem like they would not even hurt a fly. Many breeders also say that their short legs advise them against jumping to high places with the risk of accidentally missing and falling to the ground.

In general, it is not clear when longhaired cats first appeared, as there are no African Wildcats, which are believed to be ancestors of domesticated cats, with long fur. There were claims[by whom?] in the 19th century that the gene responsible for long hair was introduced through hybridization with the Pallas Cat, however, research in the early 20th century refutes this theory.[citation needed]

[1] An Angora/Persian from "The Royal Natural History" (1894)The first documented ancestors of the Persian were imported from Khorasan, Persia into Italy in 1620 by Pietro della Valle, and from Angora (now Ankara), Turkey into France by Nicholas-Claude Fabri de Peiresc at around the same time. The Khorasan cats were grey coated while those from Angora were white. From France, they soon reached Britain.[1] Longhaired cats were also imported to Europe from Afghanistan, Burma, China and Russia. Interbreeding of the various types were common especially between Angoras and Persians.[2]

Recent genetic research indicates that present day Persians are related not to cats from the Near East but to cats from Western Europe. The researchers stated that "Even though the early Persian cat may have in fact originated from ancient Persia, the modern Persian cat has lost its phylogeographical signature."[3]

A show-quality Persian has an extremely long and thick coat, short legs, a wide head with the ears set far apart, large eyes, and an extremely shortened muzzle. The breed was originally established with a short muzzle, but over time, this characteristic has become extremely exaggerated, particularly in North America. Persian cats can have any color or markings including pointed, golden, tortoiseshell, blue, and tabby.

The Persian is generally described as a quiet cat. Homely and placid, it adapts well to apartment life. Himalayans tend to be more active due to the influence of the Siamese. One study compared cat owners' perception of their cats and Persians rated higher than non-pedigree cats on closeness and affection to owners, friendliness towards strangers, cleanliness, predictability, vocalization and fussiness over food.[23]Grooming Persian grooming is more difficult than most cats. Kеeping that coat long and luxurious requires daily work on Boots' beautiful fur coat. Brushing is highly recommended and a daily combing is also a good idea. Washing a Persian's face also helps to keep their beautiful color stable.

Since Persian cats have long, thick dense fur that they cannot effectively keep clean, they need regular grooming to prevent matting. To keep their fur in its best condition, they must be bathed regularly, dried carefully afterwards, and brushed thoroughly every day. An alternative is to shave the coat. Their eyes may require regular cleaning to prevent crust buildup and tear staining.

The Persian is the most popular breed of pedigree cats in the United States.[20] In the UK, registration numbers have dwindled since the early 1990s and the Persian lost its top spot to the British Shorthair in 2001. As of 2008, it was the 5th most popular breed, behind the British Shorthair, Siamese and Bengal.[21] In France, the Persian is the only breed whose registration declined between 2003 and 2007, dropping by more than a quarter.[22]

Longevity of the Persian is usually between 10 and 15 years on average.[citation needed] The modern brachycephalic Persian has a large rounded skull and shortened face and nose. This facial conformation makes the breed prone to breathing difficulties, skin and eye problems and birthing difficulties. Anatomical abnormalities associated with brachycephalic breeds can cause shortness of breath.[24] Malformed tear ducts causes epiphora, an overflow of tears onto the face, which is common but primarily cosmetic. It can be caused by other more serious conditions though. Entropion, the inward folding of the eyelids, causes the eyelashes to rub against the cornea, and can lead to tearing, pain, infection and cornea damage. Similarly, in upper eyelid trichiasis or nasal fold trichiasis, eyelashes/hair from the eyelid and hair from the nose fold near the eye grow in a way which rubs against the cornea.[25] Dystocia, an abnormal or difficult labor, is relatively common in Persians.[26] Consequently, stillbirth rate is higher than normal, ranging from 16.1% to 22.1%, and one 1973 study puts kitten mortality rate (including stillborns) at 29.2%.[27]. A veterinary study in 2010 documented the serious health problems caused by the brachycephalic head.[28]

As a consequence of the BBC program Pedigree Dogs Exposed, cat breeders have too come under pressure from veterinary and animal welfare associations, with the Persian singled out as one of the breeds most affected by health problems.[29] Animal welfare proponents have suggested changes to breed standards to prevent diseases caused by over or ultra-typing, and prohibiting the breeding of animals outside the set limits.[30] Apart from the GCCF standard that limits high noses, TICA and FIFe standards require nostrils to be open, with FIFe stating that nostrils should allow "free and easy passage of air." Germany's Animal Welfare Act too prohibits the breeding of brachycephalic cats in which the tip of the nose is higher than the lower eyelids.[28]

Polycystic kidney disease (PKD) which causes kidney failure in affected adult cats has an incidence rate of 36–49% in the Persian breed.[31] Cysts develop and grow in the kidney over time, replacing kidney tissues and enlarging the kidney. Kidney failure develops later in life, at an average age of 7 years old (ranging from 3 to 10 years old). Symptoms include excessive drinking and urination, reduced appetite, weight loss and depression.[32] The disease is autosomal dominant and ultrasound or DNA screening to remove affected individuals from the breeding pool has allowed some lines and catteries to drastically reduce or eliminate the incidence of the disease.[33]

Hypertrophic cardiomyopathy (HCM) is a common heart disease in all cats. It is hereditary in the Maine Coon and American Shorthair, and likely the Persian. The disease causes thickening of the left heart chamber, which can in some instances lead to sudden death. It tends to affect males and mid to old-aged individuals. Reported incidence rate in Persians is 6.5%.[34] Unlike PKD which can be detected even in very young cats, heart tests for HCM have to be done regularly in order to effective track and/or remove affected individuals and their offspring from the breeding pool.[35]

Early onset Progressive retinal atrophy is a degenerative eye disease with an autosomal recessive mode of inheritance in the Persian.[36] Despite a belief among some breeders that the disease is limited to Chocolate and Himalayan lines, there is no apparent link between coat color in Persians and the development of PRA.[37] Basal cell carcinoma is a skin cancer which shows most commonly as a growth on the head, back or upper chest. While often benign, rare cases of malignancy tends to occur in Persians.[38] Blue smoke Persians are predisposed to Chédiak-Higashi syndrome. White cats, including white Persians, are prone to deafness, especially those with blue eyes.[39] Persians are more prone to side effects of ringworm drug Griseofulvin.[40]

As with in dogs, hip dysplasia affects larger breeds such as Maine Coons and Persians. But the small size of cats means that they tend not to be as affected by the condition.[38] Persians are susceptible to malocclusion (incorrect bite), which can affect their ability to grasp, hold and chew food.[38] Even without the condition the flat face of the Persian can make picking up food difficult, so much so that specially shaped kibble have been created by pet food companies to cater to the Persian.[41]

There are many varieties of Persians. These include: 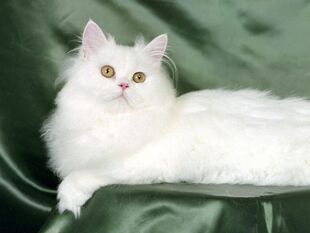 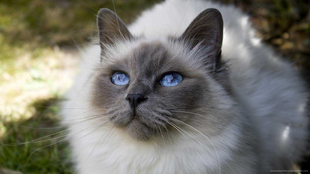 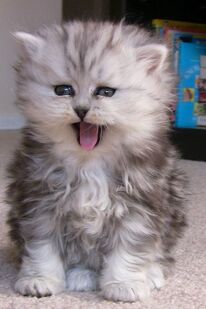 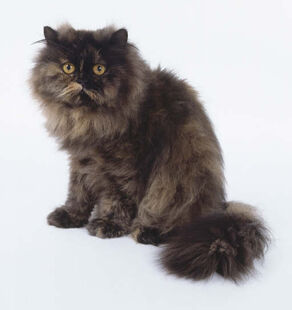 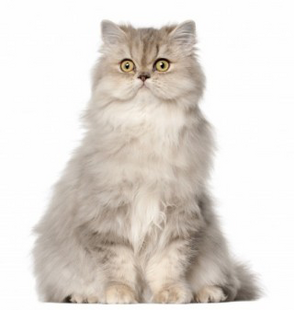 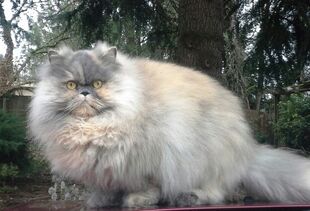 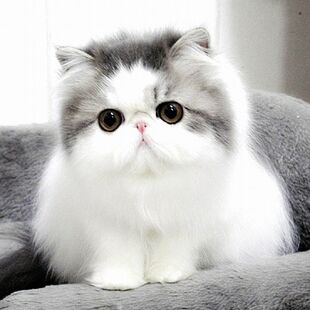 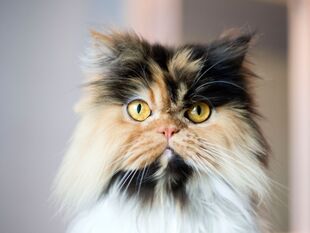