A polydactyl cat is a cat with a congenital physical anomaly called polydactyly (or polydactylism, also known as hyperdactyly), a type of cat body type genetic mutation, that causes the cat to be born with more than the usual number of toes on one or more of it's paw. Cats with this genetically inherited trait are most commonly found along the East Coast of the United States and in South West England.

The true polydactyly is a congenital abnormality, genetically inherited as an autosomal dominant trait of the Pd gene with incomplete penetrance.

Normal cats have a total of 18 toes, with five toes on each front paw and four toes on each hind paw; polydactyl cats may have as many as seven digits on its front and/or hind paws. Tiger, a Canadian polydactyl cat with 27 toes, was recognised by Guinness World Records as having the highest number of toes on a cat.[1] (However, unofficially, this title goes to Mooch, a 28-toed American polydactyl cat from the New England state of Maine. Mooch's owners, Bob & Becky Duval, have submitted evidence to the Guinness Book of Records.[2]) Various combinations of anywhere from four to seven toes per paw are common, and the number of toes on either the front or rear paws is typically the same. Polydactyly is most commonly found on the front paws only, it is rare for a cat to have polydactyl hind paws only, and polydactyly of all four paws is even less common. The cats do not have 6 toes, they have 5 in the front, and 4 in the back

The nickname "double-pawed cat" is a misnomer since there is a specific double paw condition, although this condition may be interrelated with polydactyly.[3]

Feline radial hypoplasia (see squitten) is a mimic of polydactyly and is considered a severe condition. Radial hypoplasia may cause the formation of extra jointed toes, but it is not a result of the Pd gene normally associated with polydactyls. It thus does not cause the "mitten cat" or "thumbcat" condition where the extra toes occur separated from the normal ones just like a dewclaw, usually associated with an additional pad which makes them look like an underdeveloped foot sticking out near the base of the normal toes. Rather, radial hypoplasia-related extra toes are immediately adjacent to the normal ones, giving the cat overly large, flat feet;— colloquially known as "patty feet" or "hamburger feet". Though this looks less serious than true polydactyly (as the feet appear "normal" apart from having one or two extra toes), breeding such cats will eventually result in severely crippled offspring. Cats used in polydactyl breeding programs can be screened by x-ray for indicators of radial hypoplasia, and cats suspected to have radial hypoplasia should not be used for breeding.

The condition seems to be most commonly found in cats along the East Coast of the United States and in South West England. Polydactyl cats have been extremely popular as ship's cats. Although there is some controversy over whether the most common variant of the trait originated as a mutation in New England or was brought there from England, there seems to be agreement that it spread widely as a result of cats carried on ships originating in Boston, and the prevalence of polydactylism among the cat population of various ports correlates with the dates when they first established trade with Boston.[3][4] Contributing to the spread of polydactyl cats by this means, sailors were long-known to especially value polydactyl cats for their extraordinary climbing and hunting abilities as an aid in controlling shipboard rodents. Some sailors also considered them to be extremely good luck when at sea.

Nobel Prize-winning author Ernest Hemingway was one of the more famous lovers of polydactyl cats, after being first given a six-toed cat by a ship's captain. Upon Hemingway's death in 1961, his former home in Key West, Florida, became a museum and a home for his cats, and it currently houses approximately fifty descendants of his cats (about half of which are polydactyl). Because of his love for these animals, "Hemingway cat", or simply "Hemingway", is a slang term which has come to describe polydactyls.

Some sources state that these cats are rare in Europe because they were killed as witches'  familiars,[4] but other sources indicate that they are quite common in England.[3] Polydactyl cats are very common in the Cardigan area of Wales, where they are known as "Cardi-Cats."

Caring for a polydactyl cat

This type of polydactyly is not life-threatening and usually not even debilitating to a cat. Some polydactyl kittens initially have more difficulty in learning to walk than normal animals. However in some cases polydactyly appears to improve the dexterity of the animal. For example, a common variation with six toes on the front paws, with two opposing digits on each (comparable in use to human thumbs), enables the cat to learn and perform feats of manual dexterity generally not observed in non-polydactyl cats, such as opening latches or catching objects with a single paw.

Cats usually "file down" their nails, thereby removing the outer layer. However, some of the claws of polydactyl cats are in awkward positions, so they are not able to trim them down by scratching. If proper trimming is not done, then these claws could grow into the cat's flesh and cause infection.

American Polydactyl Cats are bred as a specific cat breed, with specific physical and behavioral characteristics in addition to extra digits.[5]

A particular strain native to Ithaca, New York, is known as the "Ithacat".

The American Polydactyl is not to be confused with the pedigree Maine Coon polydactyl. The polydactyl form of the Maine Coon is being reinstated by some breeders.[6] 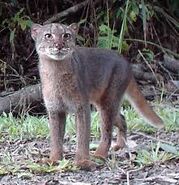