The Ragdoll is a large, semi-longhaired breed of cat with a color point coat and blue eyes. The breed is carefully bred to produce large affectionate animals in three patterns, two with white (mitted and bicolor) and one with no white (colorpoint). The name "Ragdoll" is derived from their tendency to go limp and relaxed when picked up. They are sometimes known as "puppy-cats," a term used to refer to unusual behavioral tendencies in cats that are reminiscent of dogs. Such behaviors include following people around, a desire for frequent affection, and their relative lack of aggression toward other pets.

The Ragdoll was developed in the 1960s by American breeder, Ann Baker in Riverside, California. Baker began to develop the Ragdoll breed in 1963. She bred a male Birman type cat with her white Angora type cat, Josephine, and produced Daddy Warbucks, who resembled a Birman. Eventually, she mated Daddy Warbucks with Josephine and produced offspring that would became the foundation stock for the breed.[1][2] In the ensuing years Ann Baker selectively bred the breed for the desired traits, such as gentle demeanor, pointed coloration, non-matting coat, and tendency to go limp.

In order to retain control of a growing number of breeders, Ann Baker trademarked the name Ragdoll, and established her own registry, the International Ragdoll Cat Association (IRCA). IRCA enforced strict standards on anyone who wanted to breed or sell cats under the name Ragdoll, and they were not allowed to register with other cat fancy associations. Some of the early breeders, however, were dissatisfied with the IRCA, and broke ranks with them. Among the defectors was a husband-and-wife team, Denny and Laura Dayton, who wanted Ragdolls to gain mainstream recognition. Beginning with a breeding pair of IRCA cats, they eventually developed the standard currently accepted by major cat registries such as the Cat Fanciers Association. Since Ann Baker owned the rights to "Ragdoll," non-IRCA breeders could not legally use the name until 2005, when the trademark was not renewed.

The docile and floppy nature of the Ragdoll is a characteristic thought to be passed down from the Persian and Birman breeds. There are contrary statements on whether this trait might be the result of genetic mutation.[3][4] The extreme docility of some individuals have led to the myth that Ragdolls are pain-resistant. Some breeders in Britain have tried to breed away from the limpness due to concerns that extreme docility "might not be in the best interests of the cat." Breed standards describe the Ragdoll as affectionate, intelligent, relaxed in temperament, gentle and easy to handle.[5][6]

Ragdolls are sometimes known as "puppy cats," "cat-dogs," "dog-like cat," etc., because they have behavioral tendencies that are commonly associated with dogs. Some of these tendencies include, running to greet their owners at the door, following them from room to room, and seeking attention. Some Ragdolls have been taught to come when called and play fetch.[7]

The Ragdoll is one of the largest domesticated cat breeds with a sturdy body, large frame and proportionate legs. A fully-grown female weighs from 13 to 23 pounds. Males are slightly larger, ranging from 15 to 25 pounds or more.[8] The genes for point coloration are also responsible for the blue eyes of the Ragdoll. More intense shades of blue are favored in the show ring. Though the breed has a plush coat, this coat consists mainly of long guard hairs, while the lack of a dense undercoat results in, according to the Cat Fanciers' Association, "reduced shedding and matting."[9] Mitted Ragdolls, which were not allowed titling until the 2008-2009 show season, will often be confused for Birmans. The easiest way to tell the difference is by size (the Ragdoll being larger) and chin color (Ragdolls have white chins, while Birmans have colored chins), although breeders recognize the two by head shape and boning.

The Ragdoll’s semi long coat is plush and silky, and requires minimal grooming to keep it looking its best. They should be combed with a steel comb on a regular basis to find and remove any loose hair or tangles. Quality coats consist mainly of long, soft guard hairs. Like all breeds of cats, Ragdolls will shed, usually with the change of seasons. The absence of the thick, dense, insulating undercoats results in reduced shedding and matting.

Ragdolls come in six different colors - blue, chocolate, cream, lilac, red, and seal. This also includes the tortoiseshell pattern in all colors and the five patterns. All Ragdoll kittens are born white. They have good color at 8 – 10 weeks and full color and coat at 3 – 4 years. There are three different patterns:

The mitted pattern is similar to the pointed with the exception of the paws and abdomen.

A Ragdoll kitten with a bicolor pattern. 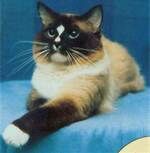 This is a traditional Ragdoll. 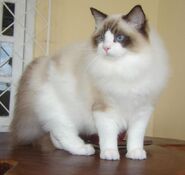