The Snowshoe a breed of cat, that is half American Shorthair and half Siamese. They come in several color combinations. They usually have white paws and a colored tail.

The Snowshoe is a rare and relatively new breed of cat originating in the United States of America. Snowshoes were first seen in Philadelphia, when a breeder's Siamese gave birth to three kittens with the pattern. The breeder, Dorothy Hinds-Daugherty, began to promote the cat and began a breeding program for them. When Hinds-Daugherty left the program, Vikki Olander began working with the cats and recruited new breeders, as well as working towards full recognition with cat associations. Despite having existed for 45 years, Snowshoes are rare due to the difficulty of reproducing exactly the coat markings. These are based on recessive genes for the color points and on the co-dominant but variably-expressed piebald pattern gene, making it difficult to predict the appearance of offspring.

The coat coloration recognized by registries and associations is point coloration, and it comes in a variety of colors. Some associations do not recognize certain colors, while others do. Snowshoe cats have an affectionate and docile disposition. Due to this, they do not do well under circumstances where they are left alone for long periods of time. Snowshoes are also very vocal, though their voices are not as loud as the Siamese, a cat found in their breed heritage. They are noted as being very intelligent and have the ability to learn tricks and open doors. The cats also enjoy water, and may swim on some occasions.

In the 1960s, a cat, owned by Siamese breeder Dorothy Hinds-Daugherty, produced a litter of Siamese kittens in Philadelphia, Pennsylvania. Three of the kittens had unique markings, consisting of white points and feet. Intrigued by their looks, she began working to breed cats like them, using seal point Siamese with bicolor American Shorthairs. The offspring of those cats lacked the Siamese points, but by breeding the offspring to Siameses, the desired look was accomplished. Hinds-Daugherty named the breed "Snowshoe" because of their white boots. Hinds-Daugherty promoted the Snowshoe at local cats shows, though they were not recognized at the time. Hinds-Daughtery eventually abandoned the Snowshoe breeding program, and it was taken up by Vikki Olander.

Olander wrote the first breed standard for the Snowshoe, and succeeded in obtaining the Cat Fanciers Federation (CFF) and the American Cat Association's experimental breed status for the Snowshoe in 1974. However, by 1977, Olander was the last breeder of the Snowshoe in the United States. After struggling to keep the breed alive, Olander was contacted by Jim Hoffman and Georgia Kuhnell, who were interested in the breed. Other breeders joined Olander, Hoffman, and Kuhnell, and they obtained the champion status from the CFF in 1983. In 1989, Olander left the program, as her fiancé was allergic to cats. However, by then the Snowshoe had a strong following, and the breed attained champion status with the American Cat Fanciers Association in 1990 and was recognized by The International Cat Association in 1993. Currently, breeders work to attain acceptance with the Cat Fanciers Association, but struggle with the lack of cats and breeders needed for the association's requirements.

The Snowshoe is a rare breed, partly due to the difficulty of breeding cats with markings and patterns that conform well to breed standards. The Snowshoe's pattern relies on recessive genes and other factors to produce desired results. One gene, which causes the "V" facial pattern is an example of incomplete dominance. If the offspring produced as two dominant genes for the marking, then the feature will be larger than a cat with one dominant gene. However, other factors may influence the feature, which makes it difficult to predict the outcome. Another issue is the white boots, which can be caused by a piebalding gene or a gloving gene. The genes are difficult to control, and many cats' boots extend too far up the leg, do not reach far enough up the leg, or the cat completely lacks white. As such, pet quality Snowshoes usually have too much white, too little white, or white features are mismarked.The cats' body type further complicates breeding, as the breeder must achieve the correct head shape and ear set, while still maintaining the American Shorthair's body structure and the length of the Siamese.

Snowshoes are extroverted cats, who love to spend time around their owners, due to this it is often recommended that owners of this feline, get another cat, ideally one with a social personality,to keep the Snowshoe cat occupied whilst their owners are away from home. The Snowshoe is well known for its strong loyalty, love and affection that it displays towards its owner. They are active (but not overly so), are vocal, but their voices aren't as shrill and loud as the Siamese and are very clever often being able to learn some commands and walk on a leash when introduced at a young age. The Snowshoe cat also likes water and some will swim on occasion. The feline can live with tolerant children who will respect it, teenagers, adults and the elderly. 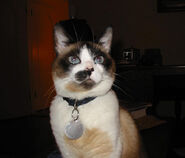