The Sphynx (also known as Canadian Hairless) is a rare breed of cat known for its lack of a coat.

The Sphynx appears to be a hairless cat, although it is not truly hairless, they have very, very short hair. The skin should have the texture of Chamois leather. It may be covered with very soft hair that is often described as peach fuzz. Since sphynx cats have no hair to keep them warm, they prefer to cuddle up against other animals and people; they even tend to cuddle up and sleep with their owners under the covers. Lack of coat makes the cat quite warm to the touch. Whiskers and eyebrows may be present, either whole or broken, or may be totally absent. Their skin is the color their fur would be, and all the usual cat marking patterns may be found in Sphynx too.

Sphynx are very gregarious and considered the most friendliest breed of cat. They are full of energy and curiosity but enjoy moments of affection with their owners and love attention. The Sphynx has dog like traits, such as being social around guests and greeting their owner/s at the door. The Sphynx is a highly intelligent breed of cat that needs stimulation and fun things to do. Sphynx get on well with most cats, but dislike Siamese cats.These cats cross with a lot of hybrid cats here is the list:

While Sphynx cats lack a coat to shed or groom, they are not maintenance-free. Body oils, which would normally be absorbed by the hair, tend to build up on the skin. As a result, regular cleaning (usually in the form of bathing) is necessary; one bath a week is usually sufficient.[1] Care should be taken to limit the Sphynx cat's exposure to outdoor sunlight at length, as they can develop sunburn and photo damage similar to that of humans. In general, Sphynx cats should never be allowed outdoors unattended, as they have limited means to conserve body heat when it is cold. Their curious nature can take them into dangerous places or situations.[2]

Although Sphynx cats are sometimes thought to be hypoallergenic due to their lack of coat, this is not always the case for cat specific allergies. Allergies to cats are triggered by a protein called Fel d1, not cat hair itself. Fel d1 is a tiny and sticky protein primarily found in cat saliva and sebaceous glands. Those with cat allergies may react worse to direct contact with Sphynx cats than other breeds. However, conflicting reports of some people successfully tolerating Sphynx cats also exist.[3] However, these positive reports may be cases of desensitizing, wherein the "hairless" cat gave the owner optimism to try and own a cat, eventually leading to the positive situation of their own adaptation.

The Sphynx cat also appear to have more ear wax than most hairy domestic cats because they have little to no hair in their ears to catch and protect them from a build up of impurities in their ears, like dirt, skin oils (sebum), and ear wax which accumulates more frequently in the hairless sphynx breed. The Sphynx cats ears will need to be cleaned[4] on a weekly basis, usually before bath time. The Sphynx breed also tends to accumulate oils and debris under their nails as well as the skin fold above the nail due to the lack of fur, so, like the ears, the nails and surrounding skin folds need to be cleaned properly as well. This is generally done at bath time along with a weekly nail clipping.[5] The sphynx breed does require more grooming than a typical domestic cat with fur.

The Canadian Sphynx is recognized by cat fancy associations as being a healthy robust breed. Lack of hair can cause health issues with kittens in the first weeks of life due to susceptibility to respiratory infections. Reputable breeders will not let their kittens go to new homes without being at least 12 weeks of age to ensure the kitten is mature enough to cope in a new environment.

The breed does have instances of the genetic disorder hypertrophic cardiomyopathy. Studies are being undertaken to understand the links in breeding and the disorder.[6]

Sphynx cats can catch common feline diseases and should be immunized in the same way as other breeds.

Although hairless cats have been reported throughout history, breeders in Europe have been working on the Sphynx breed since the early 1960s. The current American and European Sphynx breed is descended from two lines of natural mutations:

Other hairless breeds might have body shapes or temperaments that differ from those described above. There are, for example, new hairless breeds, including the Don Sphynx and the Peterbald from Russia, which arose from their own spontaneous mutations. The standard for the Sphynx differs between cat associations such as TICA, FIFE and CFA.

It has been theorized that Sphynx hairlessness might be produced by an allele of the same gene that produces the Devon Rex (re), with the Sphynx allele being incompletely dominant over the Devon allele and both recessive to the wild type. However a different genetic symbol (hr) is given to the Sphynx gene and it is more likely that these are different genes interacting with each other. The only allowable outcross breeds in the CFA are now the American Shorthair and Domestic Shorthair. Other associations may vary and the Russian Blue is a permitted outcross in the GCCF. In Europe mainly Devon Rex has been used for outcrosses.

In 1999 SGC Apophis Nordstrom of Classical Cats won the TICA International Alter of the Year. In 2006 SGC Classical Cats Valentino won the TICA International Cat of the year. In the Cat Fancier's Association, GC, RW, NW Majikmoon Will Silver With Age was Cat of the Year for 2006. The following year, GC, RW, NW Enchantedlair NWA Cornflake Girlwas Kitten of the Year. These awards are handed out for the highest scoring cats, across all breeds during the current show seasons. 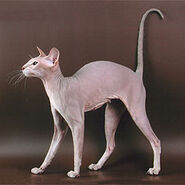