A tabby is a cat pattern with a distinctive coat, featuring mostly stripes. It also can also contain dots in its pattern. Tabby cats are erroneously assumed to be a cat breed. [1] In fact, the tabby pattern is found in many breeds of cat, as well as among the general mixed-breed or mongrel population. The tabby pattern is a naturally occurring genetic feature that may be related to the coloration of the domestic cat's direct ancestor, the African Wildcat.

The French tabis "striped silk taffeta", "a rich, watered silk," from Middle French atabis (14c.), from Arabic 'attabiya, from 'Attabiy, a neighborhood of Baghdad where such cloth was first made, named for prince 'Attab of the Umayyad dynasty.[2]

Since the tabby pattern is a common wild type, it might be assumed that medieval cats were of tabby type. However, one writer believed this to be untrue, at least in England. Some time after the mid - 17th century, the curious antiquary John Aubrey noted that William Laud, the Archbishop of Canterbury was "a great lover of Catts " and "was presented with some Cyprus-catts, i.e. our Tabby-cats". He then claimed that "I doe well remember that the common English Catt, was white with some blewish piedness : sc, a blew. The race or breed of them are now almost lost."[3]

There are four tabby patterns that have been shown to be genetically distinct: mackerel, classic, spotted, and ticked.[4] A fifth includes tabby as part of another basic color pattern, the "patched" tabby, which may be a calico or tortoiseshell cat with tabby patches (the latter is called a "torbie"). A number of other variations are due to the interaction between domestic cat and wildcat genes in breeds such as the Bengal and can now be seen in the Bombay.

The mackerel tabby pattern has vertical, gently curving stripes on the side of the body. The stripes are narrow, and may be continuous or broken into bars and spots on the flanks and stomach. Often, an 'M' shape appears on the forehead. Mackerels also feature a 'peppered' nose, where black spots appear along the pink tip of the nose. Mackerels are also called 'fishbone tabbies' probably because they are named after the mackerel fish.[5] Mackerel is the most common tabby pattern.

Classic (or 'blotched') tabbies have a similar 'M' pattern on the head, but the body markings are different, having a whirled and swirled pattern with wider stripes that make what are referred to as "butterfly" patterns on their shoulders, and usually a bullseye or oyster pattern on the flank. The legs and tail are more heavily barred and the pattern is variable with respect to the width of the bands.

The ticked tabby pattern produces hairs with distinct bands of color on them, breaking up the tabby patterning into a salt-and-pepper appearance. Residual ghost striping or "barring" can often be seen on the lower legs, face and belly and sometimes at the tail tip.

The spotted tabby may not be a true pattern but a modifier that breaks up the mackerel pattern so that the stripes appear as spots; the stripes of the classic pattern may be broken into larger spots. Both large spot and small spot patterns can be seen in the Australian Mist, Bengal, Egyptian Mau, and Ocicat breeds.

The tabby is not a breed of cat, nor is it a coat color. It's simply a coat pattern. It can show up in combination with a variety of coat colors. A cat's coat can be described as red tabby or gray tabby. Black and blue are colors that usually show up without tabby markings, but with some cats, a faint tabby pattern can actually be noticed. White is the only color that does not have any tabby markings.

Bi-colors can have the tabby pattern show up on the colored patches of their coat. Tortoiseshell cats sometimes display a pattern where the three-colored tortoiseshell pattern is mixed with tabby markings. These cats are known as "torbies".

The most commonly identified kind of tabby, the Classic Tabby, tends to have a pattern of dark browns, ochres, and black. The uniform or nearly uniform striping around the circumference of the tail indicates feral origins in that particular cat's family tree.

The Silver Tabby, as it is often known, is a distinctive white/black tabby often in a mackerel or blotched pattern.[6] The steel-white of the fur is what gives it its name.

In cat genetics, pattern is unrelated to color, and so the tabby pattern may occur in any cat color, including tortoiseshell (tortoiseshell tabby cats are often called 'torbies'). White spotting of any level can also appear in combination with tabby patterns.

The tabby patterns are due to 3 distinct gene loci and one modifier:

The agouti gene,A/a, [7] controls whether or not the tabby pattern is expressed. The dominant A reveals the underlying tabby pattern, while the recessive non-agouti or "hypermelanistic" allele, a, prevents it. Solid-color (black or blue) cats have the aa combination, hiding the tabby pattern, although sometimes a suggestion of the underlying pattern can be seen (called "ghost striping"). However, the O gene for orange color suppresses the aa genotype, so there is no such thing as a solid orange cat.

The primary tabby pattern gene, Mc/mc, sets the basic pattern of stripes that underlies the coat. Mc is the wild-type tabby gene and produces what is called a 'mackerel striped' tabby. 'Classic' tabbies are cats who also possess mc, a recessive mutant gene that produces the blotched pattern.

The ticked pattern is on a different gene locus than the mackerel and classic tabby patterns and is epistatic to the other patterns. A dominant mutation, Ta / ta, masks any other tabby pattern, producing a non-patterned or 'agouti' tabby with virtually no stripes or bars. If the ticked pattern gene is present, any other tabby pattern is masked. Cats homozygous for the ticked allele (Ta / Ta) have less barring than cats heterozygous for the ticked allele. When a cat of this genetic make up is selectively bred for lack of barring and wide banding on the hair shaft the resulting pattern is referred to as shaded. 80% of orange tabbies are males but there are some females.

Polygenes (multiple genes effecting the same trait) may also alter a mackerel pattern, 'breaking' the stripes into spots. Evidence would suggest that this effect is not seen with classic tabbies.[8]" 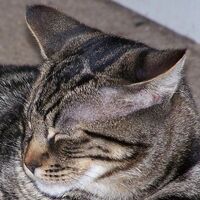 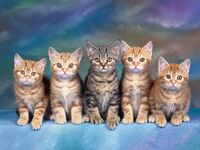 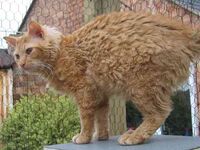 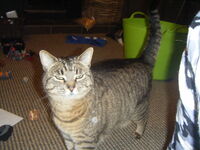 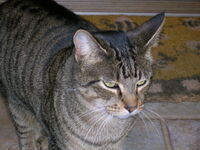 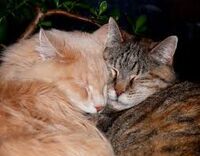 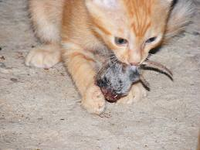 This Tabby is ready for attack! 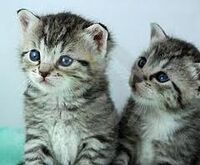 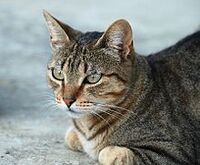 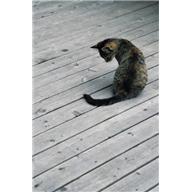 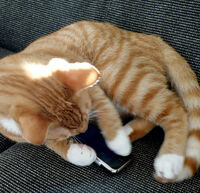 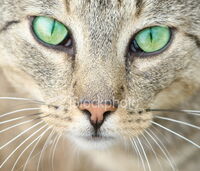 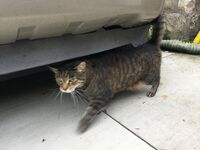 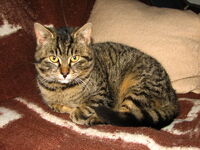 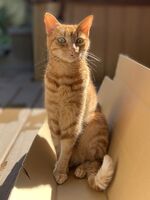 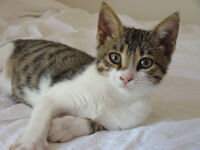 A Tabby Cat with White pattern